It\’s hard to watch good guys turn bad. We don\’t want our heroes to fall.
But sometimes, it can be hard to watch our villains turn good, too.
Take Maleficent, Disney\’s re-introduction of one of its all-time best/worst evildoers. In Sleeping Beauty, Maleficent is as bad as bad can be—the self-proclaimed \”Mistress of all Evil\” who calls upon the powers of hell to help her do her nasty work.
Let me be honest: I kinda like that in a villain. It\’s nice to see someone who knows who they are and really owns it, y\’know? Forget the moral complexity, the makers of Sleeping Beauty said in 1959. Give us a woman with green skin and horns.
So much to my shame, I was ever-so-slightly disappointed in the positive moral trajectory in Maleficent. In the 2014 film, Angelina Jolie\’s Queen of Mean isn\’t so much as a dastardly diva as someone who\’s been really, really hurt—in more ways than one. The result, we see, is a pretty interesting examination of what hurt and bitterness can do to the human soul—and a hint of what is the only recourse out of it.
Be aware: There be spoilers ahead.
Maleficent wasn\’t always the towering figure of darkness we came to know in Sleeping Beauty. Once upon a time, she was a little fairy girl with horns and wings, full of hope and promise. When a boy named Stefan stumbles into her magical land and tries to swipe something (a pretty little gem), Maleficent gently tells him that stealing\’s wrong and winds up befriending the kid. The two become the best of buds (an unlikely relationship, given that Maleficent\’s magic land and Stefan\’s kingdom are constantly at war) and, eventually, even a bit more than that. In fact, Maleficent falls in love with the lad.
But the two grow apart and don\’t see each other for years. In that time, Maleficent becomes a powerful defender of her realm. Stefan becomes a steward for the mortal king. But when the dying king tells his court that he\’ll give the crown to whoever kills Maleficent, Stefan sees his chance for rapid career advancement. He takes off to the moors to rekindle his relationship with the fairy, planning to drug her and kill her while she sleeps.

But he can\’t: He still feels some affection for the girl (now a beautiful, winged woman). But he really covets the kingdom, too. So he slices off Maleficent\’s beautiful wings instead, taking them back to the king (misleading him in the process). Maleficent wakes up and is, understandably, devastated. Stefan mutilated the two things that made the fairy who she was: her wings and her soul.
Now, the potential spirituality of all this is interesting. When you look at a whole Malificent, your eyes are naturally drawn to the two things that make her so different from you and me—her wings and her horns. Both are, for Christians, instantly recognizable: When we think of humanoid-like beings with wings, most of us think of angels. Horns, on the other hand, are shorthand for the devil and demons. Neither horns nor wings are good or evil in themselves, of course, but they do represent—and have for centuries—the good and evil in the universe and, perhaps, the good and evil in ourselves (think about those angels and demons that appear on someone\’s shoulders in the old cartoons).
Stefan takes from Maleficent something angelic in her—something good. He steals what allowed her to fly closer to heaven. And, now earthbound—even dragging around at first as if the earth\’s gravity was pulling her closer to itself—she allows anger and bitterness and her more evil, horned nature to seep into the cracks of her soul.
She retreats to a dilapidated castle for a while to prood. And when she leaves it, Maleficent is a different person: Powerful in her anger, gorgeous in her hatred. She\’s a true villain in look and deed. She curses Stefan\’s little baby, Aurora. She and the king are now irrevocably at odds now, literally warring against each other. It reminds me of a really bitter divorce.
And that, I think, is at least partly intentional. We see here the horrors of a relationship gone horribly bad—how an act of betrayal can lead to an act of vengeance, a spiral of anger and hatred that can spin out of control. Each word and deed becomes more ammunition in this battle of … what? Wills? Control? Utter annihilation? Perhaps they don\’t know. When this sort of hatred spills over, there are no real goals, it would seem. Only the desire to hurt. We can get the same way, too. Many of us may know friends or couples who\’ve fallen to this level—where they can no longer stand the sight of each other. In our hurt, we wall ourselves away. And when we emerge, we sometimes come out different: Our hate can make us strong (just like Darth Vader warned us), but it twists us, too. It turns us into something we weren\’t before and were never meant to be.
In Maleficent and Stefan, we see the corrupting power of hurt. The bitterness of loss. After Maleficent lays the curse on Aurora, Stefan turns into a full-time brooder, so obsessed with destroying Maleficent that he doesn’t even attend his own wife’s deathbed. 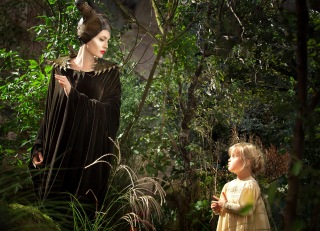 Maleficent is much the same … until she grows close to the very thing she cursed. Throughout Aurora’s childhood, Maleficent is never far away—watching, sometimes even caring for the child. So close she is that Aurora recognizes her shadow, a constant presence in her childhood. And she dubs Maleficent her fairy godmother. In the space of who knows how long, the two become close. And somewhere along the line, Maleficent realizes that she has room for something other than hate in her heart. Aurora—a name which references a strange dance of light in the cold, winter dark—has illuminated something of Maleficent’s black soul. Our villainess discovers a capacity for love.
I think that Disney missed a chance here to take this story of redemption and make it extra-special. Stefan could’ve been redeemed too, it seems: He wasn’t always bad. I’d like to think that he cared for Maleficent and loved his daughter. But here, Stefan takes the mantel of the true villain—incapable of accepting love through the iron hatred inside him.
But this, too, is a powerful reflection of how love, particularly God’s love, works. We may be offered love, even forgiveness. But we’re under no obligation to accept it. So often, we refuse. Our pain and anger won’t allow us to. We’d rather nurse a righteous bitterness than accept a little grace.
Toward the end of the movie, Aurora finds Maleficent’s wings and, magically still flapping, they find their way back to their mistress. She’s again whole, and powerful—a symbolic healing reflecting what Aurora had already done in the fairy’s soul. No longer the pure, horned evildoer, Maleficent spreads her wings, looking for all her past faults and sins, a little more angelic. She’s been restored. Redeemed. Maleficent, through grace, can fly again.