Skip to content
Walt Disney always knew the value of a good villain.
Maleficent, who haughtily strides into theaters Friday in the guise of Angelina Jolie, is proof of that. This self-proclaimed \”Mistress of All Evil\” is Disney\’s most dastardly diva, a woman who could teach Star Wars\’ dark Emperor a thing or two about fashion and eat Hannibal Lector for breakfast (as a dragon, quite literally). Maybe it\’s the horns. The evil raven. The fact that her very name seems to mean something like \”magnificently bad\” (if we\’re liberal with our Latin/English construction). Clearly, even her parents knew she was up to no good.
Rumor has it that she cuts a more sympathetic figure in this newest of Disney flicks, but part of me hopes that they don\’t mess with the lady toomuch. It\’s nice to have someone to root against—even if it\’s not always fair.
See, the problem with evil (well, one of the many, many problems with evil) is that it\’s often quite sneaky. We like to think of it in our stories as something outside of us—something other and ugly and monstrous. But unfortunately, what we think of as evil is really just good twisted up. The ol\’ Latin prefix of \”mal\” suggests as much. Our cars malfunction. Our wayward kids are maladjusted. Our bosses are malicious. It suggests that something that once worked just fine broke along the way. It\’s not right anymore.
We Christians believe that break happened at the very beginning of the world, when sin entered into it and led us all astray. And we\’re also taught that we all are prone to sin, which means we\’re all a little broken, too. We\’ve got a malady in us.
We don\’t like to think about that. We\’re all the heroes of our own stories, after all. By default, that makes us the good guys. We\’re Sleeping Beauty and Prince Charming, right? There\’s no Maleficent in us.
But of course there is. And maybe, just maybe, some of these outward manifestations of evil help us see the darker corners of our own souls.
So with that in mind, here\’s a completely subjective countdown of my five favorite Disney animated villains—and just what they might be able to teach us, too.

5. Captain Hook. For all his faults, I\’ve always respected the sense of style of Peter Pan\’s main villain. Not everyone can pull off a hat like that. And honestly, I\’ve always felt a little sorry for the guy. After all, we all might harbor some bitterness if someone fed one of our hands to a crocodile—which, we\’re told, is exactly what Peter Pan did. (If I was Pan\’s dad, I would\’ve told him that it\’s never OK to feed other people\’s body parts to reptilian carnivores, no matter what.) But where Hook goes awry is that he never, ever lets that misdeed go. He has vowed revenge on Pan for that crocodile snack, no matter how long it takes—and in a place called Never Neverland, that could be a mighty long grudge. Hook\’s obsession with Pan is a good reminder that forgiveness is an important and healthy aspect of our faith—even when it\’s really, really hard to forgive.

4. The Coachman. Pinocchiohas so many fantastically bad characters that it\’s hard to settle on just one: \”Honest\” John, Stromboli, Monstro the whale … but since I\’m morally opposed to whaling and have the upmost respect for puppeteers, I\’d like to focus on the Coachman, the rotund fellow who takes Pinocchio off to Pleasure Island. He\’s the worst kind of villain—a guy who misleads the innocent and then turns them all into donkeys afterwards. For me, the guy\’s a pretty potent symbol of our own inclinations to slip into temptation and excuse our own bad behavior. We don\’t need a coachman to take us to Pleasure Island. Most of us can walk there all on our own. 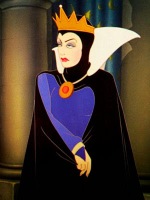 3. The Wicked Queen. The queen in Snow White is Maleficent 1.0, and even after more than 80 years, she\’s still a potent symbol of evil. But in her own way, she\’s a dramatic and still jarring zag away from how we typically think of evil. See, we humans have a bias toward beauty. Even modern-day studies suggest that we\’re more prone to believe pretty people than ugly ones. But here, the evil is found in this uber-glamorous queen (love that black cowl thingy she\’s got going for her). It\’s only when she \”disguises\” herself as an old crone that we see her true nature. And why does she change? Jealousy, plain and simple. The Queen decides to have Snow White killed because her mirror told her that she was prettier than she was. We can all feel a little jealous at times: Someone\’s always, it seems, a little prettier or stronger or smarter than we are. Sometimes we all need to be reminded that, in God\’s eyes, we\’re pretty awesome. If only someone would\’ve told the Queen that true beauty is found on the inside, well, we might\’ve saved a handful of dwarves a lot of angst (though their cottage would probably still be filthy).

2. Chernabog. Of all the Disney villains on the list, Chernabog—the demon at the end of Fantasia—is the only one I actually had nightmares about as a kid. This guy was as bad as they come, what with all the ghosts circling his head and the weird goblins he dumps into the fire and all. He\’s got claws and wings and the nastiest of scowls. He scared the dickens out of me, and I don\’t mean Charles. But here\’s a funny thing about we mortals: The things that scare or repulse us are sometimes the same things that we can be attracted to, sometimes unhealthily so. As a kid, I couldn\’t get Chernabog out of my mind. I didn\’t want to be the guy … and yet, the power that he wielded at the top of that mountain was, in a way, pretty enticing to a little boy who went to bed at 8 p.m. No one would make that winged demon eat his beats, that\’s for sure. Power  can be an, um, powerful temptation for some. And while power in itself isn\’t all bad (my editor certainly wouldn\’t think so), it can lead us down some dark, even diabolical paths. 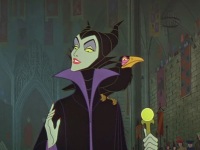 1. Maleficent. If she wants to call herself the Mistress of All Evil, who am I to argue? While she may find a measure of redemption in the new movie, she\’s really, really bad in Sleeping Beauty—as in a servant-of-the-devil bad. I don’t think it\’s any accident that Prince Phillip fights the ol\’ girl with the Sword of Truth and the Shield of Virtue—an echo, perhaps, of Paul\’s \”Armor of God\” passage in Ephesians 6. (The shield even has a Christian cross emblazoned on it.) Clearly, Maleficent made some bad choices in her life. But maybe she would\’ve been in a position to make better choices had she, I dunno, not spent her time alone (goblin henchmen don\’t count) in a castle surrounded by thorns (yes, yes, you know-it-all Disney watchers, the thorns came later. Just go with me here. We\’re speaking metaphorically.)  I think that maybe, had she spent a little more time with her fellow fairies, she might\’ve turned out differently. Life and faith, after all, are meant to be lived in community. We need people to tell us when we\’re getting a little, um, weird. And perhaps, with a little more companionship, someone might\’ve ventured to tell her that the whole horned hat thing was a bad fashion choice.