My Plugged In review of Godzilla starts out like this:

Hey, we all have problems. You got \’em, I got \’em. Maybe you\’re failing algebra or struggling to pay the bills. Maybe you\’re feeling a little flu-ish at the moment. Maybe your job is in jeopardy. Maybe your movie review is due right now and you\’re still trying to think of something clever to say. Our lives are never, ever problem free.
But some problems are bigger than others.

Back in 1954, Godzilla—the original movie that made the big guy so big—not only was a huge problem for the people of Japan, he represented one. Back then, the huge dinosaur-like beast was disaster incarnate, awakened by a nuclear blast. He was a not-so-subtle metaphor of nuclear destruction and terror—a horror that the Japanese people, with Hiroshima and Nagasaki still fresh in their collective memory, knew better than anyone else in the world.
As Toho studios continued to produce more Godzilla movies, it introduced ever-more exotic monsters, many of whom had a bit of symbolism attached them. Mothra (who first appeared in 1961) was almost a benevolent nature god, protecting the world and its many life forms from forces that would seek to do it harm. (Some have postulated that Mothra is symbolic for religionitself, or even Christianity with Mothra\’s penchant for death and rebirth.) Hedorah, a.k.a. the Smog Monster (from 1971) had some obvious environmental implications. Et cetera.

Even in this latest Godzilla is more than just a super-sized cash grab. This is, on one level, an environmental fable: Monsters called MUTOs (Massive Unidentified Terrestrial Objects) were uncovered by a hasty mining operation in the Philippines and involved in a horrific nuclear power-plant “earthquake” (reminiscent of the Fukushima Daiichi nuclear disaster of 2011). They unleash devastating electromagnetic pulses that wreak havoc on the grid and snack on radiation. At one point, Japanese scientist Dr. Serizawa tells us that “the arrogance of man is that nature is in our control, and not the other way around.”
“You have to ask yourself, ‘What does Godzilla represent?’” Director Gareth Edwards told The Daily Beast. “The thing we kept coming up with is that he’s a force of nature, and if nature had a mascot, it would be Godzilla. So what do the other creatures represent? They represent man’s abuse of nature, and the idea is that Godzilla is coming to restore balance to something mankind has disrupted.”
But whatever the stated symbolism, there’s no question these monsters represent problems. In fact, they are, both literally and metaphorically, huge problems—especially for those in the path of their huge descending feet. They’re too big to deal with, really. You just don’t sit down and reason with a 300-foot monster.
I think we all know the feeling. We know what it feels like to be faced with an issue that seems almost entirely out of our control. We face plenty of monsters in our lifetime. Sickness. Finances. A broken relationship. Depression. These problems are terrible no matter what, but when we feel like we’re powerless to do anything about them, it’s so much worse. Sometimes, it feels like we’re at their mercy. Helpless. Disposable, even, like a Godzilla extra. I’m in a place like that right now. It’s not very comfortable, feeling like you’re sitting in one of those trains that a Japanese monster might pick up and eat like a Twinkie. But most of us have been there. And if we haven’t yet, we probably will one day. 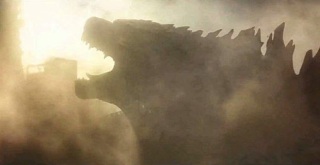 In the movie, we see folks try to take control. The Japanese try to keep one of the RUTOs contained in a deserted nuclear power plant, but that doesn’t work. The American military wonders if they might bomb these monsters away, but that has its problems, too. They’re like we are. We need to feel like we’re in control. We have to do something. Waiting around isn’t in our nature.
But sometimes, God tells us that that’s exactly what we have to do.
“But they who wait for the Lord shall renew their strength,” we read in Isaiah 40:31. “they shall mount up with wings like eagles; they shall run and not be weary; they shall walk and not faint.” In Psalms 33:20-22, we read, “Our soul waits for the Lord; he is our help and our shield. For our heart is glad in him, because we trust in his holy name. Let your steadfast love, O Lord, be upon us, even as we hope in you.”
It’s not comfortable to wait. It’s not very satisfying to trust. The Bible’s full of folks who wonder how long God’ll keep them hanging on. But that’s what God wants us to do sometimes. When things are out of our control, we’re asked to wait and trust and hope and pray.
That’s pretty much what Serizawa tells his anxious co-stars. Instead of trying to fix the situation, just let the monsters take care of themselves. “Let them fight,” he says. I doubt Serizawa’s a Christian, but he too has a kind of faith: A faith that nature will figure it out and put everything back in balance.
In the movie, that message gets incredibly muddled: Seems to me that if nature wanted to find some sort of “natural” balance, she might side with the gigantic MUTOs, who were here way before us and are simply doing “natural” stuff—eating and laying eggs. Think to long about Godzilla as a nature fable, and it falls apart.
But when we think of it through the realm of our faith, it works better (at least a little). We too can be faced with problems that tear our world apart. We too are asked to put our faith and trust in something outside ourselves—a being we can barely comprehend. And that can be a scary, scary thing. We’re not used to relinquishing control.
But sometimes, it’s the only thing we can do. When our problems grow too big, we have to rely on the strength of God, and trust that even while our worlds might not come out unscathed, He’ll be with us—no matter what. And when the credits roll, we’ll realize that all we needed was God all along.