What It’s About: Dr. Ryan Stone (Oscar nominee Sandra Bullock), Matt Kowalski and a handful of other astronauts are doing some work on the Hubble telescope when a freak accident sends a lethal shower of debris their way. The disaster destroys their space shuttle, kills their co-workers and leaves them stranded in space without a clear way home. Their chances of survival seem slim, and yet they cling to a thread of hope—as thin as the tether that binds the both of them together.
Some Thoughts:Hundreds of years ago, Celtic Christians sought out places on their green, windswept island where God seemed nearer to them, where the membrane between heaven and earth was slight and small, where mere mortals could seemingly almost touch the divine. These early Christians called them “thin places.”
The setting of Gravityseems, both physically and spiritually, such a place. Ryan and Matt float literally in the heavens, where the air is not just thin but gone, and God might be anywhere. Everywhere.
I don’t think that thin places are geographical, really. Someone may look down from a mountain or up toward a church steeple and have, what feels like, a profound moment with God, while others are unmoved. Faith isn’t like geocaching—that we’ll dig up spiritual fulfillment if we go to such-and-such a place. I think God makes those thin places for us as individuals, often when we expect them the least but need them the most. 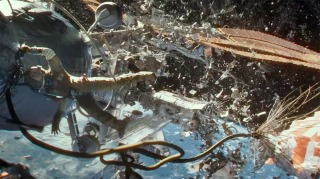 If anyone needed a divine helping hand—or better yet, a working spaceship—it was Ryan. Stranded hundreds of miles above the earth, she was as far away from mortal help as a human being can be. And for a time, it’s not clear she even wants help. Mourning the death of her daughter, part of her seems to want to join her (though she doesn’t know where, exactly, such a reunion would take place). She’s not really living as much as existing through habit. Her real life died with her daughter, we’re led to believe, and this horrific space accident might just be the coup de grace.
In the dark of space, the darkest of spaces, her mind—oddly—turns to prayer.
“Nobody will pray for my soul,” she says, floating in a dying space capsule. “I’ve never said a prayer in my life. Nobody ever taught me how.” And she sadly turns down the oxygen and waits to slowly suffocate and freeze.
But then—spoiler warning, for those few of you who still haven’t seen this flick—Matt Kowalski knocks on the outside of the capsule. The same Matt Kowalski that Ryan watched float away from her.
“It\’s nice up here,” he admits to Ryan. “You can just shut down all the systems, turn out all the lights, and just close your eyes and tune out everyone. There\’s nobody up here that can hurt you. It\’s safe. I mean, what\’s the point of going on? What\’s the point of living? Your kid died. Doesn\’t get any rougher than that.”
But then Matt turns a corner.  “If you decide to go, then you gotta just get on with it. Sit back, enjoy the ride. [Or] You gotta plant both your feet on the ground and start living life. Hey, Ryan? It\’s time to go home.”
The movie doesn’t tell us that Matt came back from the dead to chat. It might’ve been a product of a lack of oxygen, of stress, of a million other factors. Those who are determined to explain away the unexplainable will invariably do so.
But Ryan—a woman who went to space without hope or faith—believes it to be something other. She speaks to Ryan—asking him to give her daughter a hug and a kiss. And when her feet find the ground again, she looks up and says “thank you.”
In those thinnest of thin places, something touched Ryan and pushed her home.

We find those thin places when we need them most, I think. Several years ago, I found one driving home from work—one afternoon when I was struggling with stress and guilt and a deep sense of unworth. I hadn’t been to church for several years then. My relationship with God was strained, as thin as a tether.

And then, as drove and listened to some tunes and thought about the wreckage that seemed to be my life in that moment, the skies almost seemed to open. I gasped and felt God—the certainty of Him, the joy and terror of Him, the glory. It was if I had been given a glimpse of the true meaning of the strangest, prettiest word in Christendom: Hallelujah.
That one moment didn’t change my life. I didn’t become a new man. Change is slow and faith is hard. And yet in that moment, it was if I had seen (if only for a time) a glimpse of Life, capital L. Life as God intended it to be. And I saw a glimpse of God Himself behind it all.
It all sounds rather silly, I suppose. I’m a rationalist by training, a skeptic, in some ways, by nature. I’m a Christian, largely, because it makes so much sense to me. It’s reasonable. It works. And yet, behind all that, there is this moment, and fleeting moments like it: Moments that I can’t explain and don’t want to.
Perhaps it was an odd blip of brain chemistry, brought on by stress and sadness—a shot of spiritual endorphins to help me crest a difficult personal hill. Perhaps it was a trick of psychology, a mental placebo to fool me into feeling better. Perhaps. And yet that moment, whatever it was, helped me see with new eyes, feel with new hope. I found what feels like firmer footing in that moment. And in that day and every day thereafter, part of me says thank you.
Some More Thoughts:Feel free to check out what I wrote about Gravityfor The Washington Post.
Questions:
1. Have you ever found a thin place? Where? When?
2. What would have become of Ryan had Matt not come along when he did? Would she have found her way home anyway?
3. Would you call Matt’s seemingly post-mortem visit a miracle? Why or why not?
What the Bible Says:
“I can do all things through him who strengthens me.”
Philippians 4:13
“Fear not, for I am with you; be not dismayed, for I am your God; I will strengthen you, I will help you, I will uphold you with my righteous right hand.”
Isaiah 41:10
“For I consider that the sufferings of this present time are not worth comparing with the glory that is to be revealed to us.”
Romans 8:18