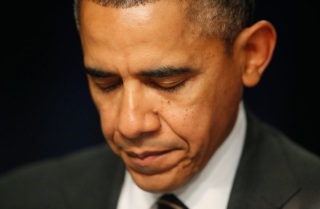 When President Barack Obama talked with faith leaders Thursday morning at the National PrayerBreakfast, he spent most of his time discussing not the religious freedom we enjoy in this country, but the lack of freedom in other parts of the world. He quoted from Psalms and Isaiah and pointed to instance after instance where religious rights are being trampled. He suggested that as people of faith, we are commissioned to stand up for the inalienable rights of others—including their right to worship how they want. He said:
\”We believe that each of us is \’wonderfully made\’ in the image of God.  We, therefore, believe in the inherent dignity of every human being—dignity that no earthly power can take away.  And central to that dignity is freedom of religion—the right of every person to practice their faith how they choose, to change their faith if they choose, or to practice no faith at all, and to do this free from persecution and fear.\”
Obama\’s speech came on the heels of a new study by the Pew Research Center, which found that religious restrictions had hit a six-year high in 2012. A full third of the world\’s 198 countries were described as having \”high religious hostilities,\” and researchers noted that \”religious hostilities increased in every major region of the world except the Americas.\” Egypt is the harshest country on the planet when it comes to governmental restrictions of religion, while Pakistan was considered by Pew to have the highest social hostility—that is, where religious minorities are actively intimidated, ostracized or attacked.
Some instances have gotten lots of press. In his address, Obama mentioned Kenneth Bae, the Christian missionary sentenced to 15 years of hard labor in North Korea, and Saeed Abedini, a pastor in Iran who\’s been imprisoned for 18 months because he\’s Christian. Some, not so much. The Pew report noted the case of the 2012 Nigerian riots, where Muslim youth burned Christian businesses and churches and eventually killed four Christians. Two more Christians were killed by a Muslim mob in Kenya. In Somalia, the Islamic militant group al-Shabab beheaded a man in November of 2012, believing he had converted to Christianity.
Naturally, people of other faiths were targeted, as well. Muslim women were assaulted for wearing veils or headscarves and called \”terrorists\”—sometimes, presumably, by Christians. A rabbi and three Jewish children were killed in France by an Islamic extremist. And, of course, six Sikhs were killed in the United States—shot to death by a white supremacist.
While most Christians believe that their faith is the \”right\” faith and are encouraged to bring others into its holy fold, I believe that what Obama says in this matter is true. God did not use divine coercion to force us to love and worship him. It is our choice: It must be if it is to be real love and worship at all. And as such, we must preserve that choice for others wherever and whenever we can.