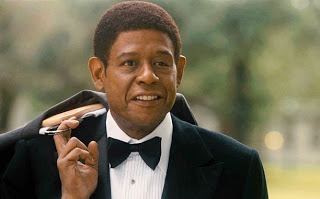 Lee Daniels’ The Butler was the No. 1 movie this past weekend, and it was nice to see. The film is a nicely crafted, uplifting tale with some pretty great performances. I thought John Cusack made a surprisingly effective Richard Nixon, and Alan Rickman and Jane Fonda were a surprisingly effective Mr. and Mrs. Reagan. Oh, and Oprah Winfrey hasn’t lost her acting chops since The Color Purple, either.
It also had a strong spiritual undercurrent about it—not overt or preachy at all, but meaty enough for the Weinstein Company to apparently commission a “faith companion,” outlining some of the themes in play (under such broad headings of “Prudence” and “Justice” and “Temperance.”
The guide is pretty good, and for those interested, they can read it here.
But not wanting to duplicate their efforts, I wanted to concentrate a bit more on one of the main themes of the movie: The relationship between the butler, Cecil Gaines, and his son, Louis.
Cecil, who grew up in a time and place where African Americans were killed for little more reason than the color of their skin, was forced to be subservient. For him, progress is slow, steady and personal: He believed that hard work would help him rise above—and it did. He served seven Presidential administrations well and, in so doing, gave his wife and kids a life he’d never have dreamed.
Louis was raised in an environment much different than the one in which Cecil grew up, and he went to college just as the civil rights movement was beginning. Louis became a Freedom Rider and was regularly beaten, abused and thrown in jail.
For years, the two clash: Cecil thinks that Louis is a troublemaker. “Every gray hair I have is because of that boy,” he says. Louis is ashamed of his father’s servitude, believing him to be an Uncle Tom.
But both, in their own ways, were heroes—and after decades of friction, the two come to realize it. Their reunion is perhaps the most touching part of the movie.
“I lost you,” Cecil tells his boy. “I’m sorry.”
These same sorts of divisions, I think, litter our world—misunderstandings and superficial differences that tear us apart when we could and should be binding ourselves ever closer with one another. The Christian subset is no better and may be worse: Jesus wasn’t gone very long before Christians started squabbling with each other, even though they likely numbered in the hundreds. There’s 2 billion of us now, and it seems sometimes there are just as many things dividing us: denominational differences, style differences, differences in tone and tenor.
I know that many of those differences matter, but still. It’s a shame that we can’t all get along a little better, given that we worship the same God and pay homage to the same Savior. We could do so much more good in the world, I think, if we could unite our resources occasionally and focus on a cause we can all agree on. Maybe we should all be a little sorry about that.