Demons are not very subtle.
Every demon I\’ve ever seen—restricted, thankfully, to movies—have been about as restrained as Lady Gaga after chugging a few Red Bulls. They stomp around and scare people and spit pea soup. They scream profanities and chant in Latin and sometimes twist the folks they\’re possessing into pretzels.
If I was a demon, I think I\’d try to play it a little cooler. Because as soon as your host starts to weep blood or levitate out of bed, it\’s sure to bring the exorcists around, and before you know it, poof! You\’re being cast out and forced to endure interminable lectures from your higher-ups.
Of course, subtle demons would hardly be the subject of wide-release movies, either. Maybe demons just like the attention. Or maybe there\’s something in the very character of a demon that makes it impossible to be demure. After all, isn\’t self-restraint some sort of a … virtue?
The demon from The Conjuring certainly could use some counseling on how to control one\’s impulses.
She wasn\’t always a demon: Back in the 1800s, she was simply a witch named Bathsheeba who, shortly after her son was born, sacrificed the child to Satan. As soon as the deed was discovered, she ran out of her lovely Rhode Island home and hung herself on a tree outside—using her final breath to curse whoever might dare to buy the property forever after.
But unless you put these sorts of things in writing, people tend to forget. And so a century or so later, the Perron family (hubbie Roger, wife Carolyn and their five girls) move into the house and live quite peacefully for, oh, five minutes. And then things start to unravel.
The very first night, they find mysterious boarded-up cellar—something you\’d think would\’ve been spotted by an inspector. The next morning, the family dog is dead. Before long, the girls are screaming and sleepwalking and playing with strange, invisible playmates—and it\’s clearly about time to bring the professionals in—Ed and Lorraine Warren, two demonologists who\’d go on to earn a measure of fame dealing with a certain house (and its undesirable inhabitants) in Amityville, New York. 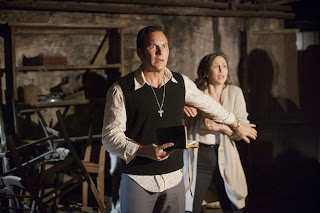 The Conjuring, like The Amityville Horror, is allegedly based on a true story straight from the real case files of the Warrens. While I’m sure the makers took a few liberties (and frankly, I hope they did), the real Lorraine Warren said they got the crux of the story right. Moreover, the Warrents are fervent Catholics who believe very sincerely in both demons and the power of God to dispel them. At the end of the movie, we see a quote from Ed Warren:
\”The fairy tale is true. The devil does exist. God indeed exists. And for us, as people, our very destiny hinges upon which one we elect to follow.\”
As such, The Conjuring is a pretty interesting feature for a Christian movie reviewer such as myself. The movie takes its faith seriously—so much so that faith-based marketers Grace Hill were involved in the publicity push. It\’s the sort of movie that embraces not just a generic sort of supernatural happening, but a real devil poking at a real, Christian God.
It\’s not the first horror flick to tackle spirituality so sincerely, of course. The original The Exorcist—the scariest movie I\’ve ever seen—was based on a book written by a Christian (William Peter Blatty), who intended it as a \”sermon that no one can sleep through.\” Scott Derrickson, who directed the well-regarded The Exorcism of Emily Rose, told Christianity Today that \”horror is a perfect genre for Christians to be involved with.\”
I know of people who\’ve felt the first real tug of faith through movies such as this.
But many Christians, particularly conservative Evangelical Christians, don’t typically like horror. It’s dark stuff, after all. Disturbing. They\’re certainly never very \”nice\” movies. Rarely are they uplifting.
Derrickson again:

I have a complex reaction to horror movies—too muddled with personal baggage, perhaps, to be completely fair. I understand the unease that many Christians feel, but I\’m sympathetic to Derrickson\’s point of view. 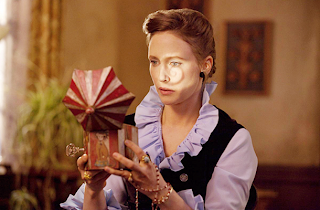 Horror movies are designed to move us away from a place of comfort, and I wonder sometimes whether we Christians can sometimes be a little too consumed with making ourselves comfortable. We sometimes tune out ideas that threaten our worldview, shun people who might challenge us. Sometimes, it seems the evangelical subculture goes to some pretty great lengths to keep us from encountering anything that might discomfort us: We can spend our childhood in Christian schools, go to Christian colleges, do all our business at Christian establishments (helpfully noted by Christian business directories). Yes, the Apostle Paul did tell us to \”not conform to the pattern of this world,\” but I don\’t know if he would\’ve advocated building a whole new world so we wouldn\’t have to deal with the other one at all.
This is not to equate a dislike of horror movies with our sometime impulse to protect and even isolate ourselves. But still, it’s interesting. At times, I think we long to make earth a little more like heaven. Horror flicks, and often even the world around us, remind us that heaven is a long way off. We live in a dark, uncomfortable and sometimes frightening place. And movies like The Conjuring—in their own rather unsubtle way—hint at how frightening, without God, it might be.