Skip to content
Yesterday during a run, I spent some time listening to an excellent StoryMen podcast (from the collective brain trust of Matt Mikalatos, J.R. Forasteros and Clay Morgan) featuring Eisner Award-winning comic book writer Mark Waid. He had some fascinating things to say about all sorts of stuff, but I was particularly interested in what he had to say about Man of Steel—especially the movie\’s controversial finale. While he was quick to say that he liked much of the movie (as I did), he said the fact that Superman killed Zod \”broke my heart.\”
And then he said this:

Cynicism is very easy to write. Cynicism\’s the easiest thing to write. And if you hammer me for two hours about how this character is a symbol of hope, and he will lift us to the sun, and he will inspire us to greatness and he will show us the light … there’s no payoff for that, because in the end, he makes a very cynical decision and we’ve lowered Superman to our level, and that is not what Superman is created for. We don’t need Superman to be more like us. We are supposed to be more like Superman.

I was thinking about that in the context of another, far more cynical movie: The Lone Ranger, in theaters as of Wednesday. 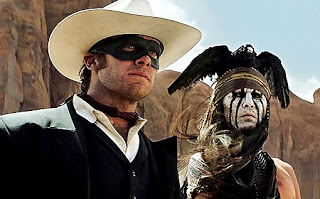 I watched Lone Ranger television reruns when I was maybe 7 or 8. And I know there were a few afternoons I slapped on a dimestore domino mask, rode a stick horse around the living room and hollered, “Hi Ho, Silver!” In a time when Westerns were no longer en vogue, the Lone Ranger still had some pull with a tyke like me.
I think I liked him for much the same reason that I liked a lot of folks back then. He was an incorruptible good guy. You knew the Lone Ranger was never going to suffer a crisis of confidence. Tonto was never going to leave the Lone Ranger’s side. Silver was always going to come at a whistle. When you’re a kid, having people you can believe in, that’s a big deal. Kids need those sorts of heroes. Maybe we all do.
I think from the beginning, that’s been a huge part of the Lone Ranger’s appeal. He was a true-blue, practically square hero. He even had a code of honor—a factoid I didn’t know about until I wrote my Lone Ranger movie review for PluggedIn. It goes like this:

I believe…
that to have a friend, a man must be one.
that all men are created equal and that everyone has within himself the power to make this a better world.
that God put the firewood there, but that every man must gather and light it himself.
in being prepared physically, mentally, and morally to fight when necessary for that which is right.
that a man should make the most of what equipment he has.
that \’this government of the people, by the people, and for the people\’ shall live always.
that men should live by the rule of what is best for the greatest number.
that sooner or later…somewhere…somehow…we must settle with the world and make payment for what we have taken.
that all things change but truth, and that truth alone, lives on forever.
in my Creator, my country, my fellow man.
The Lone movie seems to forget all that. Here, John Reid (the real name of Mr. Ranger) is indeed a law-abiding do-gooder. And yet, his sense of morality—that the rule of law triumphs over a fast gun, that human life is precious—is treated as an antiquated naivety that should be dropped in light of the harsh Western sun. Tonto’s all about working outside the law and killing when need be. And slowly (unless things find a better equilibrium in what would look to be a very doubtful sequel), the Lone Ranger begins to see things Tonto’s way.
It would seem the makers of The Lone Ranger would have us believe that the heroism of our fathers’ and grandfathers’ day is just too unrealistic now. Too unbelievable. The world is too bad to support that sort of goodness.
\”You can\’t make a movie now with the sort of story, characters and action that a 1950s TV show had,\” Armie Hammer (who plays the Lone Ranger) told movie critic Roger Moore. We are, he says, \”too hip for the guy the way he was. Audiences are more discerning today — more sophisticated in terms of what they expect from a Western, a story like this. We had to give these two men a fresh twist, and I hope we pull it off.\”
But by assuming that we’ve outgrown the sort of aspirational heroes that the Lone Ranger stood for in the first place, I believe the movie stripped out his very soul. You can’t have the Lone Ranger without his Dudly Do-Right rectitude. If you take that away from him, you just have a man in a mask. And we’ve already got plenty of those.
Perhaps this isn’t so much an indictment of The Lone Ranger as it is on us. Or me. Maybe Hammer has a point. I find my adult self drawn to the darker heroes: the Batmans and Jack Bauers of the world. I’m sure if I watched an episode of the Lone Ranger now, I’d roll my eyes from the cheese and saccharine sincerity.
But shouldn’t we find a place for real, honest-to-goodness heroes somewhere? People who, in Waid’s words, don’t come down to our level, but force us to reach up to theirs? Isn’t that, in a way, what our society is based on? Our desire to be better tomorrow than we are today?
For me, the newest Lone Ranger movie succeeds only in patches—when it sheds its cynicism, drops its oh-so-modern sensibilities and returns to its roots, becomes what the Lone Ranger always has been and always was meant to be. When it wipes the smirk off its face, mounts his horse and rides into the fray, the William Tell Overture playing in the background, that’s when the movie soars.