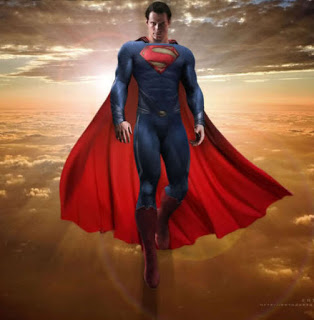 When I was a kid, my best friend Terry and I were obsessed with superheroes. Every day we were together, we\’d strap on our capes, hope for some wind to make them flap dramatically and run around the back yard, saving imaginary citizens from disaster.
But I didn\’t imagine that superheroes were things that really walked (or flew) among us … until one afternoon when Terry told me that Superman was real.
\”Is not,\” I said.
\”Is too,\” Terry retorted. \”He has a statue.\” Normally, that\’d clinch it. After all, he was 6. I was 5. Terry knew far more about the world than I did.
But, my innate cynicism already beginning to surface, I refused to believe him. We argued for a good 10 minutes before Terry decided he was going to prove Superman’s existence to me once and for all: He was going to stand out in his front yard and call the Man of Steel in for a visit.
And so we tromped out, and we both shouted as loud as we could. Even in my skepticism, I was hopeful. Wouldn\’t it be great if the guy wasreal?
Superman, alas, never came.
That disappointing afternoon has been bouncing around in my brain ever since I saw Man of Steel, the latest Superman reboot (landing in theaters on Friday). Because, as even as I evaluated the movie and mulled the spiritual parallels and wondered just how much they spent on explosives or whether it was all just CGI, another thought—the same thought I had when I was 5—was percolating through my noggin.
Wouldn\’t it be kinda cool if Superman were real?
All due respect to Batman and Iron Man and Spider-Man and all those other Men-Mans, Superman\’s been the guy—the ultimate superhero—for 75 years now. And while perhaps he takes a backseat in terms of popularity, to more flawed heroes, he\’s still as recognizable and, in his own way, revered, as ever. He is a true hero: charismatic, polite, sacrificial. It\’s as if someone took everyone you liked and respected, rolled them up into one buff bod and gave him the ability to fly and weld with his eyes. I mean, what’s not to like about the guy?
And let\’s face it: We could all use someone who we could embrace without reservation—someone who\’d never let us down. Someone who\’d rescue us from the disasters and terror and misery that sometimes seems to stalk us. We could all use not just a hero, but a superhero.
As I write this, much of Colorado is on fire. My house isn\’t threatened this time, as it was last summer. But plenty of others are—and their owners are nervously watching news reports, perhaps gathering up precious belongings to evacuate, perhaps unsure of whether their home is still standing. It\’s terrifying, but it\’s more than that. Disasters like this leave you feeling powerless. And feeling powerless is one of the worst feelings there is.
Superman\’s never powerless—or, at least, hardly ever. Superman will always find a way to do something. Make things better. Save us.
***
From the very beginning of his career, Superman has always had some Messiah-like attributes. His Kryptonian name (Kal-El) has been translated to mean \”Voice of God.\” He was of another world, yet became a \”human\” under the care of good but fairly nondescript mortals. He was meant to be a “savior.” In Man of Steel, those subtle nods become explicitly religious and Christ-like: This movie is as Christian a mainstream movie as maybe I’ve ever seen: Almost a Bible study in a cape. He revealed himself at age 33, asks advice from a priest in a church (as a stained-glass image of Jesus looks over his shoulder). He is, his adoptive human father tells him, “The answer. The answer to whether we are alone in the universe.” 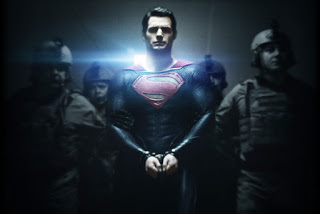 And yet this Superman is very much human, too. He struggles with his nature, and seems a little appalled that God would’ve made him so freakishly, alarmingly different than everyone else. After his father dies, Clark becomes a vagabond—stopping to work in a far corner of the world for a while, then moving on when he fears his nature might be discovered.
But in the end he realizes he must take on a greater mantel to save humanity. And to do so, it seems, he must turn himself in. He allows himself to be handcuffed and led, presumably, to his fate. It’s a nifty little echo of Jesus’ own trip to the cross—a symbolic surrender to authorities that, really, had no authority or power over them.
Part of me would like to ramble on. There’s a lot of spiritual niftiness at play here.
But I want to go back to the anecdote that started this whole narrative … the day my friend Terry and I learned that Superman wasn’t real. And we must ask the inevitable question: If Superman and Jesus are so much alike, is Jesusreal? Plenty of us call on Him in our darkest times. And sometimes, it doesn’t feel like we get an answer. Are we calling in vain? Are we just longing for someone to save us—someone who’s not there?
Superman, the original comic-book character, was the work of Jerry Siegel and Joe Shuster, both Jewish immigrants. And maybe Superman, if he was intended to be a Messiah, perhaps originally reflected more of what the Jewish people always expected a Messiah to be: A superhuman warrior, righting wrongs and rescuing us all from evil.
But as Christians, we interpret the concept of Messiah quite differently. God seems to love working with paradox, and Christianity is based on the greatest paradox of them all: A “Savior” who, it appeared, couldn’t even save himself. And yet in that act of apparent weakness—in a moment of apparent cataclysmic defeat—Jesus was both strong and eternally victorious. Weird.
Two thousand years ago, we were looking for Superman. We got something even better, even if it was hard to recognize at the time. Jesus didn’t just save our lives or homes or society: He saved us—the soul of us, the core of us.
We get that. And yet (paradoxically) we don’t. And maybe, in a way, we’re incapable of getting it. We’re human, after all—very much attached to our lives and livelihoods and stuff. We hurt. We suffer. We cry out for help.

Sometimes that help comes obviously and unmistakably. Every once in a while, miracles, or things that can seem like miracles, swoop out of the sky and give us exactly what we need. It comes like Superman, full of might and muscle and X-ray vision.
Sometimes it comes more quietly. We’re given a sense of peace. We’re given new determination to tackle our troubles, or perseverance to push through our trials.
And sometimes, it feels as though help doesn’t come at all. That’s hard to write and it’s hard to admit, but sometimes it’s true. There are times we shout for a Savior at the top of our lungs. We plead for help. And in the midst of our hurt and grief, it can feel as though no one came.
I don’t think, when we feel like that, it’s because (as sometimes happens with Superman) God’s too busy saving other people to tend to us at the moment. I certainly don’t think it’s because we’re calling on someone who’s not even there.
I believe that He’s there and He hears us. He loves us dearly. But at the same time, He understands—and wants us to understand—that in the deepest of ways, we don’t need saving: We’ve already been saved. It’s not that He’s notcoming for us. It’s that He already has.