I saw Star Trek Into Darkness recently, and I liked it: Probably my favorite movie of the summer so far. And ordinarily, I’d write a lot more about it. The ending was, in its own way, kinda nice and spiritual-y.
But to get into that here  I’d have to get all nice and spoilery, and there’s no need for that. Plus—and let’s just be honest—I’m tired. A couple of freelance projects have been kicking my keester. I’ve got to run a marathon this weekend and still need to find time to mow the lawn (curse that rain!)
So with that in mind, let me offer up something a little different this weekend: An excerpt from a book I was cobbling together at one time (and may yet finish, if anyone wants to publish it) about the spirituality of Star Trek. \”Cause even though its creator Gene Roddenberry was pretty close to an atheist, there’s actually a lot to explore.
But for this post, we’ll keep it simple and personal and, hopefully, a bit less geeky than I tend to get. It’s long. But all my posts are long. Anyone who’s stuck with me and this blog this far knows I’m not the briefest of writers. But I plan to change that in the weeks ahead. Shorter posts, but maybe more of them? We\’ll see.
Anyway, about that excerpt. Here it is.
To Seek Out New Life
God and I go way back. I was baptized when I was 7, went to Sunday school almost every week (“religiously,” you might say) and on Wednesdays, a few hours after Star Trek, I’d be chauffeured over to youth group. I was a pretty churchy kid at 13.
And I kinda hated it.
Having a faith like a child is a great thing. Jesus said it. Your pastor’s probably said it. Jars of Clay sang it. But no one ever encourages us to have a “faith like an adolescent,” and I think I know why. Adolescence is when our spirituality leaves the straight-and-narrow path and starts tromping through the bogs. Our hormones explode. Our insecurities rage. Our parents turn dumb and the kid in detention turns into a mysterious, disaffected sage. We start blasting all sorts of lovelorn or angry or angst-filled songs through our earbuds, and let’s face it: It’s hard to hear God and His still small voice over all that noise.
And almost without warning, the faith of our childhood—a religion full of flannelboard Bible stories and VeggieTales cartoons—turns into something else entirely. If you\’re lucky, you can navigate this time of life with a faith that seemlessly transitions from the flannelboard to your soul. But for some, the transition is harder: We doubt. We ask hard questions of God, maybe for the first time. And sometimes, we start saddling God with our own baggage.
For me, it wasn’t that I grew angry with God or felt like His morality cramped my style. I didn’t doubt that He was out there, somewhere. But I did doubt that He cared much for me. 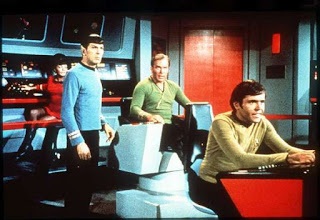 Remember, I was 13. I had braces and glasses and a smattering of pimples and looked like a prime subject for a documentary on junior high geekery. I never told anyone (other than my best friend, Bret, who sometimes watched with me) that I watched Star Trek. I mean, I looked like a geek and acted like a geek … I didn’t need to tell the world that I even watched television like a geek, too.
The other kids in my youth group, they weren’t like me. They were popular and pretty and almost completely free of pimples. They were smart. They dated each other. Their parents were unashamed of them when they walked through the mall. And worst of all, many of them were horribly, horribly nice.
And the most terrible thing was this: I knew they were just being nice. What did I have to offer them? Was I being fair? Probably not, but that doesn\’t help how I thought at the time. I was a curiosity at best, and more likely an object of pity—a project through whom the popular kids might earn points with the Guy Upstairs.
And because most of the Christians I saw were so obviously blessed with good grades and athletic talent and pimple-free skin, I started making some crazy (and mostly subconscious) assumptions about the nature of God and how He works in our lives: Maybe these youth-group peers of mine are how Christians are supposed to look, I thought. Maybe, because I\’m not like them, I\’m not really a Christian. Maybe I can\’t be one. Maybe God doesn’t want me to be one.
Maybe, when He says He loves everyone, He\’s just being nice. Just like the church kids.
And I wasn\’t the sort of guy who\’s going to bother someone who doesn\’t really want me around—particularly someone as busy and popular as God.
Now, no one taught me this. This wasn\’t bad parenting or Sunday school teaching at play here, but rather my own addled, adolescent mind messing with me. If anyone knew I was thinking stuff like this, they would’ve given me hugs and enrolled me into biweekly counseling sessions.  And if that had happened, I\’m sure I\’d be better adjusted and more secure today.
But it didn\’t. And as much as I liked my youth leaders and looked up to my peers and wanted to act and be the sort of cool, self-assured Christian they were, I couldn\’t. Every time I went to youth group, I felt … alien. I was a carbon-based life form on a silicon planet. And no matter how much I wanted to belong, I knew I never could.
“Believing in God is as much like falling in love as it is making a decision,” Don Miller writes in Blue Like Jazz. And he’s right. But in the teeth of my insecure adolescence, falling in love wasn’t an option. If I loved God, I might be rejected.
But to understand God? Or, at least understand Him better? That\’s a goal I could get my head around. It was easier then to engage God as a puzzle than a person.
The strategy seemed as viable as any and more realistic than some. After all, they did it on Star Trekall the time.
If there is a God, how can we fathom Him? If there is a soul, what can it be?
These are questions that seem to weigh heavy in the Star Trek universe—the questions that escape the tricorder. For all the show\’s scientific worldview, it embraces mystery: the mystery of love, of intuition, of instinct. It suggests there are things we might never understand but are worth exploring anyway. And even as false gods come and go in Star Trek—debunked and defeated at every turn—we\’re left with the tantalizing possibility that in a universe as unfathomable as this, the greatest mystery lies beyond space and time. Even the Enterprise cannot plumb the mind of God, and it doesn\’t even try. But indirectly, it seeks and finds evidence of a truth too massive to comprehend.

We\’re seekers. From the time we\’re children, we long to explore. What\’s behind the door? What\’s at the end of the street? What\’s outside? What\’s beyond? We search for things, we think—new vistas, new opportunities. But I think the instinct taps deeper waters, because each set of discoveries sparks new investigations, each answer forms a new question. It\’s like we\’re playing with Russian nesting dolls, but each inside is larger than the last. When the universe is mapped, would our own searching cease? Our questions finally sated? No. Deep down, we know there is more. We feel it. We hear it.
Curiosity is God\’s call.
This call is how my relationship with God began in earnest—or, more fairly, how my relationship with God began its renewal: Not as a love story, but as Star Trek. Without even really understanding what I was doing, I began looking for God—the real God, not just one that I\’ve been told about, but one I could \”see\” and \”hear\” and \”feel\” for myself. Not the God of my fathers or my childhood church or my youth group, but the Spark that made them—the Alpha and Omega, the \”I am that I am,\” the LORD, writ in caps. I couldn\’t fathom having a \”relationship\” with something that mighty. I couldn\’t imagine falling in love. So I began my search for something paradoxically more in my limited reach: A concept. A theory. A Creator.
It wasn\’t the easiest way to get to God. I made it far harder than it needed to be.
Some people come to God as if they were dogs rescued from the pound—all tail wags and slobbery tongues and boundless energy, thrilled at the prospect of having a home. I was more like a mangy stray cat, alone and cold and so very scared, slinking around God\’s house for reasons unguessed. And night after night, God would leave some water on the step and the back door open a crack.
Because God—all-powerful, all-good, all-knowing—knew me. He knew how weird and insecure I was. He knew how stupid and stubborn, too. And He wanted me to get to know Him anyway. To draw close to Him. To fall in love.
And yet, the search continues—not because I haven\’t found God, but because there\’s still so much to find. And that, too, feels very much like the world of Star Trek. The universe, like God, is filled with new adventures, new revelations. The more we know, the more we long to know. In a way, that’s what relationships are—voyages of discovery, where we learn more and more about the ones we love with each passing day. We too are like Russian nesting dolls, with another surprise under every lid. And when our relationship is with God, how could we expect to \”know\” him, even in a thousand lifetimes?
Mystery, as the folks on Star Trek will tell you, can be a beautiful thing.