If I had gotten a holiday, though, I would\’ve almost certainly probably celebrated it by watching a movie with a president in it. And I would\’ve had plenty to choose from.

According to the Internet (which is, as you know, never wrong), at least 180 have been made that feature American presidents (not counting fictional presidents, like Thomas J. Whitmore from Independence Day). Of the 44 presidents the United States has had thus far, 38 have gotten their own movies–or, at least, some fictionalized cameos. Abraham Lincoln has addressed the most screen time: A total of 25 actors in 28 separate movies have played our 16th president, from Joseph Henabery in D.W. Griffith\’s classic (but horrifically racist) The Birth of a Nation to Tom Amandes in this year\’s Saving Lincoln (now in very limited release). He\’s backed up Bill and Ted in an Excellent Adventure and spent some time as a vampire hunter earlier this year. And in a week, doppelganger Daniel Day-Lewis could take home an academy award.

It got me thinking about my favorite Presidents–not politically, but cinematically. Here, in the order you would\’ve found them in your American History class, are my top five. 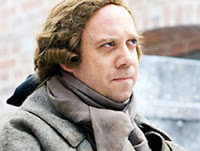 John Adams (Paul Giamatti), John Adams (2008): In the true spirit of American politics, I\’m cheating right out of the gate. John Adams was a miniseries, not a movie–but it\’s simply too good to not list here. The seven-part HBO miniseries eventually bagged 13 Emmys (the most ever by a miniseries) and brought to life the guy who, historically, had the misfortune of getting lodged between George Washington and Thomas Jefferson–two presidents who have their heads on both Mount Rushmore and the spare change you\’ve got in your pockets.

Abraham Lincoln (Daniel Day-Lewis), Lincoln (2012): I\’ve already said a thing or two about this movie. But let me say one thing more: While Day-Lewis has earned plenty of accolades for his work before, this role may make his memorable turns as Christy Brown (My Left Foot), Bill the Butcher (Gangs of New York), Daniel Plainview (There Will Be Blood) and all the rest look like mere preamble to this towering achievement.

Ulysses S. Grant (Jason Robards), The Legend of the Lone Ranger (1981): OK, so this might not have been the highlight of Robards\’ career, nor was it probably that great a movie. But I saw it when I was an impressionable kid, and for two weeks I was running around the house loading my toy gun with silver bullets. Robards\’ Grant seemed like an awfully good president to the little kid me, and as such, I\’ve never fully believed all those nasty things historians have said about him afterwards.

Richard Nixon (Frank Langella), Frost/Nixon (2008): This movie made about $27 in theaters and was still nominated for a Best Picture Academy Award. The $27 (actually, about $18.6 million) is easy to explain: Who wants to watch a whole movie about two people talking? The Academy Award nom is also pretty easy to explain: Never, since the original Lincoln-Douglas debates, have two people talking been so riveting. Langella was a favorite to take home the Oscar for Best Actor … but you can\’t really argue with Daniel Day-Lewis taking the award home for his turn as Daniel Plainview in There Will Be Blood, can you? 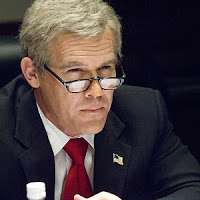 George W. Bush (Josh Brolin), W. (2008): Wow, 2008 was a big year for presidents, apparently. While staunch supporters of Dubya weren\’t thrilled with this Oliver Stone docu-comedy, I actually thought it was more even-handed than it could\’ve been. Brolin\’s turn as Bush 43 was a bit sympathetic, a bit sad … and undeniably a very effective acting job.