I was listening to the Strangers and Aliens podcast while running this afternoon, and I was thrilled to hear them discussing one of my favorite topics: Star Wars.

The gist of the podcast was discussing all the many questionable stepchildren that the success of Star Wars spawned, slating them as either of \”the light side\” or \”the dark side.\” The revival of the Star Trek franchise was given light-side status, while Moonraker–James Bond\’s worst movie ever–was justifiably banished to the Dark Side. But the topic really got me thinking about another massively important product of Star Wars: Me.

I was 8 when Star Wars came out (that\’s be Star Wars IV: A New Hope to some of you), and George Lucas\’ little creation was nothing short of a revolution to my little world, which before then had primarily revolved around reading, collecting rocks and smashing glass. (I grew up in Taos, N.M., which, despite being very artsy then and now, was a pretty boring place for non-artsy, non-sportsy kids.)

But when I saw Star Wars, my whole life changed. I became obsessed with the movie and forced my parents to take me to see it five times (remember, these were the days before we, in Taos, had ever heard of a VCR). I dreamed I was Luke Skywalker. We were too poor to buy Star Wars action figures, so I made my own out of cardboard. (My Millennium Falcon was the most pitiful-looking spacecraft ever.) It was the first movie I ever fell in love with.

My fascination with Star Wars was tolerated around my house for the most part. And, several years later, when an expert on the Star Wars universe came to visit the family church about the time Return of the Jedi was released, I found myself looking forward to going to church for the first time in years.

Imagine my disappointment when the guest speaker announced that Star Wars–my beloved, earth-shaking franchise–was awash in dualism and eastern spirituality and thus incompatible with Christianity. 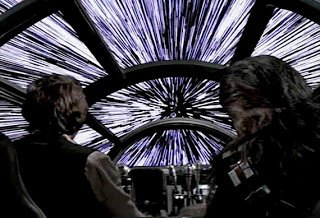 These theologians. Can\’t they leave anything alone?

I suppose my research in trying to prove this cat wrong might\’ve been the impetus to my long, weird and still puzzling road to that of a Christian movie reviewer. Now I\’m the guy who warns Christian parents about Star Wars\’ quasi-spiritual underpinnings–though I\’d like to think I\’m a bit more open-handed about it all. \”In The Force, we can see hints of Zoroastrianism and Taoism,\” I might say. \”But man, are those light-sabers awesome or what?!\”

Truth is, I have a hard time believing that watching Star Wars is a faith-shaking event for most of us (the 390,000 U.K. residents who list \”Jedi\” as their faith of choice notwithstanding). But still, the religiously wonky side of me did appreciate the spiritual underpinnings of the recent prequels, even if the movies themselves were pretty meh. Yes, the Force in the Star Wars universe still, as Yoda says, \”surrounds us and binds us.\” It has its light side and dark side. But the core story we see in the prequels (The Phantom Menace, Attack of the Clones and Revenge of the Sith) is an echo to the Fall of Adam and Eve.

Anakin Skywalker is tempted by the future emperor and his powerful \”Dark Side\” of the force–a form of forbidden knowledge, really–just as Adam and Eve were tempted by the fruit from the Tree of Knowledge. Both of these deeply rebellious acts set narratives in motion that required a miraculous intervention to fix. And even though I hated Jar Jar Binks as much as anyone, I found the redemption of Darth Vader–in some ways, a stand-in for all us miserable sinners–more moving because I better understood his backstory.

There\’s more to say on this topic, of course. But that\’ll have to wait. But now you have one more thing to curse George Lucas for: The creation of an overly interpretive, religiously oriented movie reviewer.