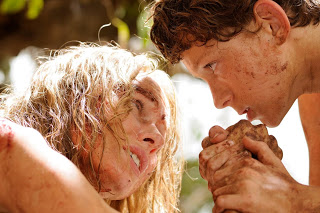 Nominations for the Academy Awards were issued this morning. The field of nine Best Picture nominees included three films we\’ve already talked about on this blog (Lincoln, Les Miserables, and Life of Pi), along with several others I reviewed for my day job at Plugged In: Argo, Beasts of the Southern Wild, Silver Linings Playbook and Zero Dark Thirty. Django Unchained and the foreign film Amour rounded out this year\’s nominations.

The Impossible earned just one Oscar nom, to my knowledge–Naomi Watts for Best Actress. And even in this year of really strong contenders, that\’s a shame. Lincoln and Argo might\’ve been more subtle and Life of Pi more beautiful. But no film this year left me quite so emotionally drained as The Impossible.

The movie, based on a true story, follows the fortunes of one vacationing family in the wake of the horrific 2004 tsunami that rocked southeast Asia. Vacationing at an oceanside resort in Thailand, Maria (Watts\’ character) watches as the gigantic, 90-foot wave rumbles over beach and building, destroying untold numbers of lives in the time it takes to swallow. And before the wave crashes into her, too, she sees the monstrous tower of water sweep over her family.

For most of the movie, we follow Maria and her oldest son, Lucas (Tom Holland), as they cling to each other for life and hope. They survive the wave, but they\’re not out of peril. And it\’s unlikely that the rest of the family–husband Henry (Ewan McGregor) and younger sons Thomas and Simon, could\’ve made it through the calamity.

The title The Impossible might, and probably does, refer to lots of things here: The impossible disaster that was the tsunami. The impossible conditions it left in its wake. Most importantly, it nods to the movie\’s unlikely, moving ending–when we learn that the entire family survived. That happy conclusion was, from what I understand, was spoiled in the film\’s trailers … and frankly, I wish I would\’ve seen one before I watched the movie. Watching this film without knowing nearly gave me an ulcer midway through. By the end, I was a weepy, wrung-out ball of nerves.

It was a wonderful movie, but could I sit through it again? I really don\’t know. It\’s impossible to say.

God, to my recollection, is never mentioned. And yet the film provokes thoughts that both challenge and reaffirm faith. It\’s hard to watch this movie and not be moved by the miraculous reunion at the end. The disaster itself, though, might cause the reignition of one of religion\’s most bothersome questions: How could an all-powerful, all-loving God allow such a thing to happen?

There are Christians who try to offer answers, of course–some of them a little embarrassing. In the end, I think most of us have to admit that we don\’t really know. Jesus tells us we will have trouble in this world–sometimes cataclysmic trouble. And while we don\’t always know the reason or cause, the only real answer we can muster is one of action: Pushing through the hard times as best we can, keeping our faith and helping others to the best of our ability along the way.

And that, in the end, is what moved me the most in The Impossible. Even in the teeth of tragedy–when she was bruised and bleeding, when flaps of her skin floated in the water like dirty rags–she kept her focus on others. We expect her, of course, to nearly kill herself to save her son: That\’s what mothers do. But she doesn\’t stop: When she and Lucas hear a child crying, Maria\’s determined to help, even though Lucas sees that her mother\’s in desperate need of help herself. But Maria won\’t stop hunting for the child, saying they should–they must–do what they can, even if it\’s the last thing they do.

When Maria finally makes it to the hospital, things are little better. It\’s obvious that Maria might not make it. But–perhaps to distract Lucas from her own dire health–she demands that Lucas do what he can to be of service to others. \”Lucas, go and help people,\” she says, simply. And he does–finding temporary solace in giving comfort to others.

It\’s a powerful lesson and directive: Helping others helps us, the movie tells us. So go, go and help people–help wherever and whenever you can. In The Impossible, Maria and Lucas do just that, even when they\’re in dire need of help themselves. I don\’t know if I could be so unselfish. But I\’d like to be.