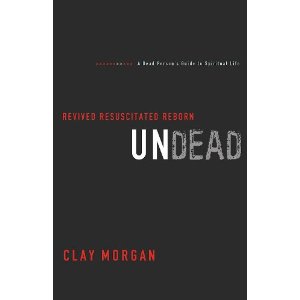 I’ve always been a bit fascinated with the story of Lazarus. You know, the guy who Jesus brought back to life after he (Lazarus) spent a good four days in a tomb—in a very hot climate, I might add.
The miracle itself is pretty amazing, though it’s not the first or last time someone in the Bible was raised from the dead. But I sometimes wonder what Lazarus’ life was like after the miracle. How did his life change? What did he do with the second chance he’d been given? Did his presence freak out the neighbors?
Clay Morgan discusses Lazarus and lots of other newly risen from the Bible in his new book Undead: Revived, Resuscitated, Reborn, available now through Abingdon Press. And while Clay can’t provide any insight into how Lazarus made use of his extra time, he tells us readers what we can learn from him and the many other “living dead” that stalk the pages of the New Testament.
Let me offer an important disclosure up front: Clay interviewed me when my own book came out, and I had a fantastic time talking with him. We’re both history geeks (though he teaches history for a living—I just read a lot), and we both have, I think, a slightly off-kilter way of looking at our faith. I don’t know Clay that well, but after reading his book, it almost feels as though we’re friends.
But maybe that’s the charm of Clay’s writing: He lets you into his life. In the midst of some impressive scholarship he packs his book with, he also offers you his own thoughts and feelings and even hints at his own past failings—all to illustrate that all of us have a chance to rise from the metaphorical dead and live again … live as Jesus meant for us to live.  And he perpetually interjects odd bits of humor here and there to keep the whole thing rolling smoothly along.
Clay gives us insight into how the folks in ancient Judea would’ve grappled with the miracles in their midst—apart from the zombie and vampire folklore our own culture has built around the “living dead.” He talks about how scandalous it would’ve been for Jews 2,000 years ago to hear words we take for granted now: “Whoever eats my flesh and drinks my blood has eternal life.” And frankly, I love the way he holds up the infamously nicknamed \”Doubting Thomas\” not as a cautionary tale, but as an example of how perhaps we should wrestle with our own doubts. He writes:

Thomas did not accept hearsay when others told him what they had experienced. It\’s simply not enough. We can\’t put our faith into how other people think or feel, either. Thomas wanted to examine the evidence for himself and have his own personal encounter with the risen savior. Peter and the other disicples had the same response. When the women said Jesus was alive, the disciples thought the story was nonsense, yet we never beat them up for a lack of faith.

It’s an enjoyable, interesting read from cover to cover. Clay examines and embraces Christianity as, I think, it must be embraced in this cynical century we live in: With heart and mind both fully engaged.