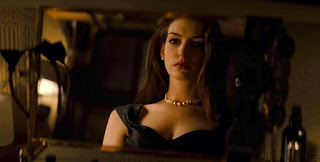 “A girl’s gotta eat.”
So says Selina Kyle—a.k.a. Catwoman—in The Dark Knight Rises. We never hear much about Kyle’s background in the film—not explicitly—but this one line really tells us all we need to know.
Kyle says it with both a hint of purr and growl—at once a flirty joke and horrible confession. The line holds true to the traditional Catwoman we see throughout her 70-plus years in the Batman mythos, the amoral Catwoman I talked about in God on the Streets of Gotham. The line suggests complex character who embraces each morally questionable action with a throwaway excuse. But it also hints at Kyle’s rough-hewn past: The choices, perhaps, she felt like she had to make in order to survive.
A girl’s gotta eat.
In The Dark Knight Rises, Catwoman’s getting her chow from Bane and the rest of Gotham’s current bad-boy clan—working with them to bankrupt poor ol’ Bruce Wayne and put Batman out of commission. She succeeds at both, and as a reward, she hopes to be given the illusive “Clean Slate”—a program that’ll wipe out her criminal record and digital history (no mean feat these days) and give her the fresh start she longs for.
I think the first time I ever came across the phrase “clean slate” was when I was a little kid reading a Christian Archie comic book. Jesus (the comic told me) wipes our slate clean. We’re given a fresh beginning, free from sin and regret.
Never mind that I had no idea what a “slate” was when I read the thing (my parents later explained that it was a little like a chalkboard); the meaning was pretty clear. A chalky mess gets wiped away. I’ve heard the phrase “clean slate” mentioned roughly a gazillion times since—almost always in relation to having your sins forgiven by God.
The whole “clean slate” phrase is so familiar in Christian circles that I wonder whether Nolan used it, in part, for that very reason. After all, Kyle was looking, in a way, to wipe away her sins—not just her criminal record, but also any misstep that ever found its way online. We don’t know what a Google search would turn up exactly on Kyle, and we don’t need to: Kyle is hyper-aware of what it says—just like we’re all hyper-aware of our own rather spotty record. We know the bad stuff we’ve done in our lives. We know when we could and should’ve been better. Frankly, I think we all have a really hard time forgiving ourselves for some of what we’ve done (I’ve wasted waaaaay too much of my time kicking myself), so when we hear Kyle long for a clean slate, we understand—because we need it, too.

And again like us sometimes, Selina looks for her Clean Slate in all the wrong places. She sells out to the bad guys who can’t or won’t give what she asks for. We hear that the whole concept of a clean slate is a myth—too good to be true.
Funny. My pastor often says that being forgiven for our sins seems to good to be true, too. “That’s why they call it the Gospel,” he says.
Last week, I talked about how Batman really grows into a Messiah metaphor in The Dark Knight Rises, and never is this transformation more clear or, I think, more powerful, than in his interaction with Kyle/Catwoman. Consider:
After pretending to be Batman’s frenemy throughout the first chunk of the movie, Catwoman turns all bad and betrays Batman to Bane in Gotham’s sewers: It’s a bitter betrayal, one that leads (I’ve argued) to Batman’s metaphorical death at Bane’s hands. In Catwoman, we see an echo of Judas, naturally … but I think it goes well beyond that. In a lot of respects, she resembles us. We all, in a way, bear the guilt of Jesus’ death. We’ve all done God wrong. It was for our sins that Jesus had to die in the first place. At least, that’s what we’ve been taught as Christians.
If this was just a straight crime-caper without any theological overtones, you’d think that Catwoman would be the last person Batman would trust when he comes back—from the dead, as it were. And yet he turns to her for help. Then, at a critical juncture, he hands her what she’s been looking for the entire movie—the “Clean Slate” program. Her sins can be wiped away with the push of a button. But when he hands the program to her, Batman gives her a choice: Take your Clean Slate and run … or stay. It’s almost as if he’s asking, “follow me.”
From a theological standpoint, I think this is the most powerful scene in the movie. Batman gives Catwoman the chance at a fresh start, just as Jesus gives us a slate wiped clean. But it’s a gift—a gift given out of grace—that comes with no strings, no attachments, no quid-pro-quo promises of future service. Batman doesn’t require Catwoman to help him get rid of Bane in exchange for the program. Nor does Jesus forgive us our sins on the condition that we’ll be perfect from here on out and give to the church and vote like a good Christian would (whatever that means). Once we take Jesus into our heart and ask Him to forgive our sins, those sins are forgiven: It’s a gift, not a contract.
But here’s the thing about this gift freely given: The gift changes us. It doesn’t force us to change—we change because we want to. We change in gratitude, in love. And Catwoman changes, too. Instead of getting the heck out of Gotham (as she was most inclined to do), she sticks it out. She becomes—at least at the end of Dark Knight Rises—a good guy. She follows Batman, just as Christians follow Christ, for one simple reason: She wants to.
I have no idea whether director Christopher Nolan intended any of this. But for me, the Batman/Catwoman arc illustrates the interplay between Jesus and us as well as I’ve ever seen in a secular movie.
Biblical authors often use the symbol of man and wife, groom and bride, as metaphors for Jesus and his Church. And as such, I found one of the last scenes in the movie all the more touching: Bruce Wayne and Selina Kyle, sharing lunch together in a far off locale as if on an eternal honeymoon.