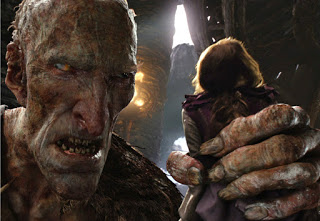 There are two basic ways to \”interpret\” story: You can try to decipher what the storyteller (be they writer or moviemaker or whatever) intentionally put there. You can determine what you, yourself, get from it.

Both have value, and both, of course, often go hand in hand. When a storyteller explicitly tells you the moral of The Three Little Pigs, most folks ain\’t gonna start mulling postmodern, Freudian interpretations of  \”chinny-chin-chin.\” Steven Spielberg\’s Lincoln is meant to give us a picture of a courageous, surprisingly complex man who bent a few rules to realize a much greater good. And you know, that\’s pretty much what most of the folks who saw Lincoln came away with.

But sometimes, we can get added value by drawing out some themes or \”messages\” unintended by the storyteller.

Take, for instance, the newly released Jack the Giant Slayer.

The movie kinda sorta follows the old fairy tale most of us are familiar with–with a few twists here and there. Jack trades his horse for a handful of magic beans. As I write in my Plugged In review:

It\’s really the most impractical trade imaginable, given that the monk [who gives Jack the beans] cautions Jack to keep the legumes far away from water. That sorta nixes the idea of Jack planting them, eating them or even setting them on the edge of the local wave pool while he goes for swim. But Jack—a trusting sort of lad—accepts the beans anyway.

His significantly more cynical uncle (with whom Jack lives) is horrified at the trade. And in a fit of anger, he flings the beans across their hovel, where one slips through a crack in the floor. We can\’t buy thatch for the roof with beans! He hollers. And he stomps off.

Shortly thereafter, a storm descends upon the kingdom, water spilling through all those unthatched holes in Jack\’s roof. And wouldn\’t you know it, Princess Isabelle, running away from an unjust marriage and to some grand adventure, runs right into Jack\’s house—just before a rivulet of water touches that magical bean underneath the floorboards. Before you can say \”Fee! Fi! Fo! Fum!\” Jack\’s house shoots straight up to the land of the giants with Isabelle in tow.

This, of course, thrills the giants to no end. After all, it\’s not every day a princess comes over for dinner.

These giants are horrific dudes who belch and fart and pick their noses. The whole giant kingdom looks like the worst frat house you could imagine. And to make matters worse, the giants just love to chow down on human flesh.

Thankfully in ages past, humankind made a crown that could control the giants. And while an evil guy named Roderick tries to use the crown for his own unsavory plot, the headgear eventually–when used wisely–saves mankind.

Admittedly, I have no idea what sort of \”moral\” or \”message\” Jack\’s makers might\’ve been trying to give us. Don\’t let your vegetable gardens get overgrown, perhaps? Move to Arizona, where clouds would hardly ever hide floating countries populated by giants? Be wary of folks with two heads?

But there is a deeper message that one can draw out of here (if one really has to because one hasn\’t written a blog post all week).

Say we looked at the giants not as giants, but as humankind\’s more animalistic natures–the monsters lurking in each of us. They are real and powerful and can, at times, overwhelm us. Maybe sometimes our more civilized instincts try to push these impulses away, to where when we\’re in our right minds, they may feel almost imaginary. But they\’re never that far away. Just a push (via an overactive beanstalk, perhaps), and they\’ll invade. And if we don\’t master them, they can destroy us.

But we do have power over them–not a magic crown that rests on our heads, but what rests inside them. Sometimes, when intellect and reason is decoupled from our core values, as it was in Roderick\’s case, it can actually harness those horrific impulses and make them ever-more dangerous. But when we have purpose and principle to go along with our reason, these giants of ours can be subdued.

Let me offer a spoiler warning right now, because the kicker, for me, comes at the end.

When Jack finally subjugates the giants and becomes king, he hides the magic crown in plain sight. He has the thing adorned with the trappings of traditional, European royalty–including crosses and other symbols of Christian faith. It\’s important to note that throughout the movie, we see and hear repeated references to God and religion–our Babel-like desire to scale the beanstalk to heaven, the black magic of the beans–suggesting that Jack\’s world is one in which faith is taken seriously. The crown becomes not just a symbol of reason, but of religion, and how the two work together to help us become better people.

A stretch? Yeah, perhaps. Again, I doubt the filmmakers had anything like this in mind when they made the movie. But it\’s a fair one, don\’t you think?